I am scared to death that I won’t have the privilege to watch my 3 children graduate, marry, and have babies of their own.  I am forever grateful to Bruce for taking such excellent care of me and not making me feel like a burden.  When you are told you have Cancer…your whole world stops.  I know how difficult it is for me to handle, but I can’t imagine how difficult it must be for Bruce and the kids.  They are my rock, my world, my life and they are the reasons I fight to beat this Cancer every day.

8:00am: you are laying on the bed in the operating room–but your not going to be sleeping through this
8:05 am: doctor comes in to tell you about procedure
8:10 am: your jabbed by 25 needles to freeze the area down far enough, but you still can feel the razor blade cutting into you.  While tears are streaming down your face from the pain & fear, you carefully let the doctor know that you are NOT numb in the area where she is slicing
8:15 am: Doctor cuts out a huge hole in you
8:25 am: doctor stitches you up
8:30 am : you get dressed
8:35 am: stitches are so tight you can’t move, every time you do it pulls the stitches
8:40 am: you sleep
1:30 pm: you wake up with a gashing pain in your abdomen
1:30 pm Monday to 1:30 pm Monday 2 weeks later, you wonder how this could have happened to you.

The rest of your life: you spend more time in hospitals and doctors offices then in your own home….every time a mole is there you are cut open and sewn back up, every time you look in the mirror you see the ugly large scar everyday.

My Melanoma could have been prevented. 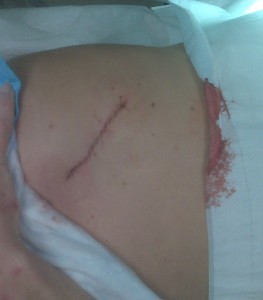 Melanoma is known as “the most lethal form of skin cancer” because it accounts for 77% of all deaths from skin cancer. Melanoma can spread rapidly – and with the exception of some rare forms of skin cancer — it is the skin cancer most likely to spread to lymph nodes and internal organs. Melanoma also may recur (return after treatment).

For these reasons, everyone treated for melanoma should continue a lifetime of regular:

About Recurrence
Should melanoma return, it will recur in one of these ways:

About Metastasis
Metastasis is a risk for anyone who has been treated for melanoma. However, when the primary melanoma (original tumor) is thin (less than 1 millimeter in thickness), surgical removal offers a complete cure in 95% of patients because the melanoma tends to be confined to the top layers of skin and is not likely to spread. This does not mean that you can be lax about self-examinations and checkups. Since 5% of thin melanomas are not completely cured, it is extremely important to perform regular self-examinations of your skin and lymph nodes and keep all appointments for checkups.

When melanoma cells spread from the primary tumor, they first pass through the lymph channel nearest the melanoma. Once melanoma has spread to the regional lymph nodes (nodes nearest the tumor), there is a risk that the melanoma will spread to distant sites (other lymph nodes and organs). Once melanoma has spread to distant sites, it is in stage IV. Treatment in stage IV may include selective surgical excision, chemotherapy, immunotherapy, and radiation therapy. However, the prognosis is poor, and organ failure often causes death. It is important to know that some people do survive stage IV melanoma.

In stage IV, melanoma can metastasize to organs in nearly every part of the body. However, cancer cells do not randomly shoot off in all directions. Each type of cancer (breast, pancreatic, etc.) has a strong likelihood of spreading to certain sites more often than others. The following table shows what organs melanoma is most likely to travel to once it spreads.

Why Melanoma Spreads to Specific Organs
While scientists know where melanoma is most likely to spread, it is not clear why different cancers are more likely to metastasize to specific sites. Scientists have three hypotheses:

A study published in March 2001 analyzed breast cancer and melanoma because both cancers tend to spread to the lymph nodes, lungs, liver, and bone. Researchers found that organ-specific chemoattractive molecules called “chemokines” are released from various organs and tend to attract circulating cancer cells to metastasize to a specific site. Melanoma’s tendency of spreading to the skin correlated with the presence of a skin-specific chemokine and a high level of corresponding chemokine receptors in melanoma cells. The researchers found that the melanoma cells had many more chemokine receptors than the cells not affected by cancer. 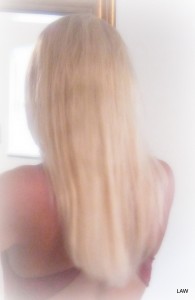 Often the best thing we can do for a friend is simply be there to listen.

A man has only one escape from his old self: to see a different self in the mirror of some woman's eyes.
Clare Boothe Luce
Joe's